A MESSAGE FROM SIGHTLINE REGARDING COVID-19
What If?
Useful insights were just a click away.
They Are

Equities staged a modest retreat from the previous week’s gains on spotty economic data, hawkish comments from the St. Louis Fed President James Bullard, and minutes from the US Fed’s July meeting later in the week. The week’s big losers were the growth-oriented technology, communication services and small caps. The TSX held ground, despite oil’s 2.6% loss on the week. Meanwhile, European shares dropped on renewed fears that persistent inflation would eventually force central banks to raise rates aggressively.

On Monday, The Federal Reserve of New York released August’s Empire State Manufacturing Survey of business activity in New York. The business activity index crashed 42 points to -32.3, one of the worst recorded readings. The new orders index dropped 36 points to -29.6, and the shipment index plummeted nearly 50 points to -24.1. Unfilled orders also fell for the third consecutive month to -12.7.1 Moreover, on Monday, the National Association of Home Builders (NAHB) reported builder confidence fell for eight successive months falling 6 points to 49 (below the break-even measure of 50) for the first time since May 2020. The August buyer traffic survey number came in at 32, the lowest reading since April 2014. In response to this reading, the chief economists at the NABH said, “The total volume of single-family starts will post a decline in 2022, the first decrease since 2011.” Sixty-nine percent of the builders are reporting falling housing demand.2

On Tuesday, the US Fed released the July total industrial production and capacity utilization. Industrial production rose 0.6 %, manufacturing increased 0.7 %, production of motor vehicles and parts rose 6.6 %, factory output moved up 0.3%, and mining gained 0.7 %. In the same report, capacity utilization for the whole industry advanced to 80.3% in July from 79.9% in June. Interestingly, the mining sector is operating at 88.0% capacity and crude at 87.0%.3

Wednesday’s retail sales report for July was an encouraging sign of consumer strength. While retail sales were flat, ex-autos and gasoline sales rose .7% and internet sales jumped 2.7%, helped by Amazon Prime Day mid-month. The consumer shift from goods to services also continued in the month.4

The long-awaited minutes for the July FOMC meeting were released, causing the market to shudder. The minutes said that “many participants remarked that, in view of the constantly changing nature of the economic environment and the existence of long and variable lags in monetary policy’s effect on the economy, there was also a risk that the Committee could tighten the stance of policy by more than necessary to restore price stability.” Further, “some participants indicated that, once the policy rate had reached a sufficiently restrictive level, it likely would be appropriate to maintain that level for some time to ensure that inflation was firmly on a path back to 2 percent.”5 While initially the market interpreted the remarks as hawkish, it later realized that the comments were consistent with previous releases.

The initial jobless claims for the week ending August 13, 2022, came in at 250,000, a decrease of 2,000 from the previous week. Continuing claims for all programs increased by 2,696 from the previous weeks. 6 The latest releases suggest that the US economy is still in growth mode, with layoffs remaining lower than expected if the economy was entering a recession. In contrast to the Empire State Manufacturing survey for August, the Philadelphia Federal Reserve reported on Thursday its gauge of regional business activity jumped to 6.2 in August from -12.3 in July. While still at -5.1, new orders rose 20 points, and shipments gained 10 points to 24.8.7 Also, on Thursday, the Conference Board published the Leading Economic Index for the US showing a decrease of 0.4% in July to 116.6. The LEI is down 1.6% in the last six months after gaining 1.6% in the last six months of 2021.

Inflation took hold in the first part of the year with rising oil prices, but lately the consumer has shown resilience as gasoline has retreated from the highs earlier in the year.8 While the market has recently been enjoying a rally, last week’s equities have once again shown that economic uncertainty is still driving investor emotions. We continue to expect choppy markets for the foreseeable future. 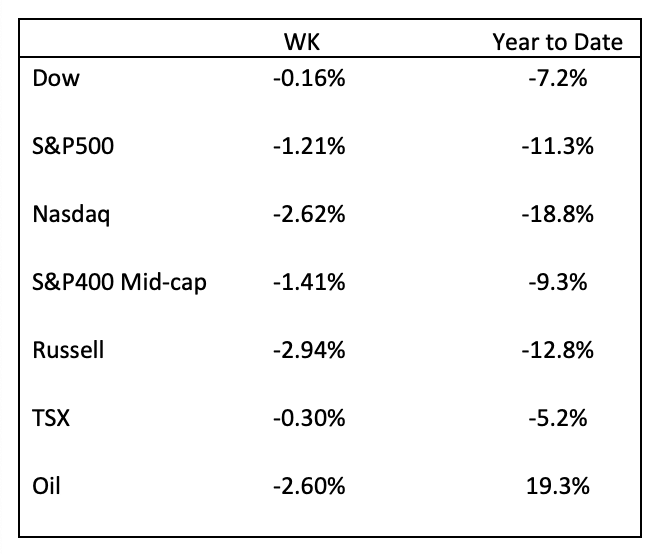 Sightline Wealth Management LP (“Sightline”) is an investment dealer and is a member of the Investment Industry Regulatory Organization of Canada (IIROC) and the Canadian Investor Protection Fund (CIPF). Sightline provides management and investment advisory services to high-net-worth individuals and institutional investors.

The opinions and information contained in this article are those of Sightline Wealth Management (“Sightline”) as of the date of this article and are subject to change without notice. Sightline endeavors to ensure that the content has been compiled from sources that we believe to be reliable. The information is not meant to be used as the primary basis of investment decisions and should not be constructed as advice. Each investor should obtain independent advice before making any investment decisions.

To contact Sightline and request a full Smart Money Market Report, fill out the contact form below